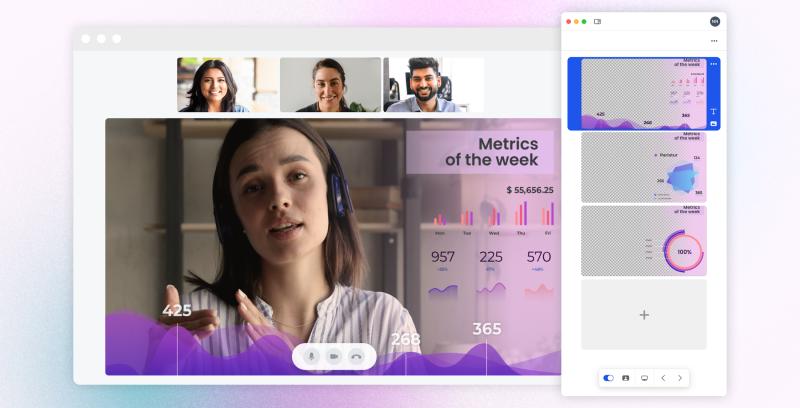 Before it became the norm, Prezi was in the virtual collaboration and presentation software business. The Hungarian company was founded in 2009 by Peter Arvai, Péter Halácsy, and Adam Somlai-Fischer. As the now-famous story goes, Arvai flew to New York for a 20-minute meeting with TED Talks creator Chris Anderson. That meeting landed them an investment, despite TED never having invested in a company before.

Prezi has grown since that initial meeting, amassing over 100 million users, with numerous Fortune 1000 companies and fast-growing startups as its client base. The pandemic also caused the company to evolve, as hybrid and remote working became widespread. In the process, Prezi has grown from an early-stage startup to an expanding company, with each transition bringing new tools and frameworks.

From startup to scale

Jim Szafranski joined Prezi in 2015 as its Chief Operating Officer before taking over the CEO role from Arvai in 2020. He introduced OKRs in 2016 “as a way to mature the business and start building out a little bit more repeatable and consistent business practices.” When Szafranski joined, the company was entering a new phase. The company’s main product—which at the time was presentation software—catered mainly to individuals in the education and commercial business space. The company wanted to move beyond the single-user base and had re-platformed its product accordingly. “We were starting to expand, serve other customers,” said Szafranski. I think that’s why we thought it was time to sort of start rolling out systems that didn’t rely on people having been at Prezi since it started."

Neither Szafranski nor Arvai had experience with OKRs, but Szafranski first learned the framework as an MBA student at Stanford Business School, where the famous Hungarian Andy Grove—the inventor of OKRs—was a professor. “The marrying of the objectives and measurable results was attractive to us. We wanted to learn how to do it and gave it a go.”

Prezi adopted the quarterly cadence. The management team developed the objectives, with product and marketing often taking the lead. They brought in a broader set of managers and sometimes individual contributors to establish the KRs.

Szafranski said that OKR process helped the company come together to achieve a common goal, such as when the company had just acquired visualization software Infogram. “We were going to build and launch an integrated product experience that brought Infogram’s standalone value into the Prezi platform, in a product named Prezi design,” said Szafranski. It was a big undertaking. Seamless integration and coordination between the Prezi legacy team and the previous Infogram (and new Prezi) employees were of the utmost importance.

By outlining a common objective and defining what success looked like to the company, the team could do just that. "These key results defined what user success and business results were needed with Prezi Design in order to justify the reduced effort that would subsequently go into the pre-acquisition Infogram product,” Szafranski explained. “The OKR structure provided the team with very key guidance to rally around and discover, design, and launch what turned out to be a very successful integration solution in Prezi Design.”

A shift in a period of uncertainty

Adopting OKRs helped Prezi mature as a company, but when the pandemic happened, Szafranski decided that it was time to move to a different framework. “Going into this time of massive uncertainty, ultimately what we were thinking we would value the most was going to be flexibility.” Developing OKRs typically took about a month, and Szafranski decided that they needed to move quickly. They ultimately landed on a 3-step framework. First, leadership would investigate and provide deep context to the whole company, how the business is doing, and what was happening with Prezi’s users. From there, they worked with the teams to set 3 KPIs that are composed of 3 high-level metrics. Lastly, the company increased transparency, increasing the pace of their all-hands meeting, from biweekly to weekly.

This context-setting practice connects daily work in line with Prezi’s higher calling. Before the pandemic, Prezi’s video platform was architectured for recorded video. As COVID began to change work practices, they noticed that their users were using their platform more and more for live video, and so they channeled their focus to better that user experience. They were also able to move fast in solving a significant user challenge—running Prezi alongside tools like Zoom, WebEx, or Microsoft team without the user feeling like they had to run two applications simultaneously. By having more context with what their customers were struggling with, the engineering team could make the user experience as if they were using a single app, said Szafranski.

OKRs as a tool to reach a company’s north star

Prezi might no longer be using OKRs, but Szafranski said that the experience has taught the company valuable lessons. “When we started rolling out OKRs, we really had increased the data mentality of the company, that you should be able to articulate what you’re trying to do. The team’s ability to increase and measure what’s happening either in our business metrics or what’s happening with our users, that increased a ton during our adoption and use of OKRs.” Whether it’s an OKR or what we’re doing—that ability to spot, think about what you’re doing, how you’ll measure it, measure it quickly, and talk about it was super valuable."

Szafranski isn’t ruling out adopting OKRs again in the future. However, he predicts that rather than being a company-wide mandate, he would implement it in areas that focus on scaling and optimization.

He believes that OKRs are most effective when companies use it as a tool to work towards their north star. “Let’s say the north star is eat market share, scale this thing that’s happening,” said Szafranski. “I can see how you’d say, okay, OKRs can be really good because we can divide out what that means to take down the market share and the key parts around the customer funnel, then cascade those out.” He went on to say, “OKRs can be good discipline, but discipline without a specific goal and priority isn’t going to help.”

The specificity of OKRs can be its strength because it can drive execution, but it can also be its weakness, said Szafranski. One way to avoid that is to ensure that companies set OKRs that are cross-functionally owned, rather than department-specific ones. In that instance, there is a danger that individual departments end up focusing too much on meeting their KRs without looking at the end-to-end impact that those KRs were supposed to bring in the first place.

Businesses need to ask themselves what they want to achieve and what the fastest line to that might be. A tool won’t be effective unless you understand your priorities and what needs to be done, said Szafranski.

“For me, it’s always customers. The more you have your team understanding the customers in the market, the faster you can achieve the potential for your business.”