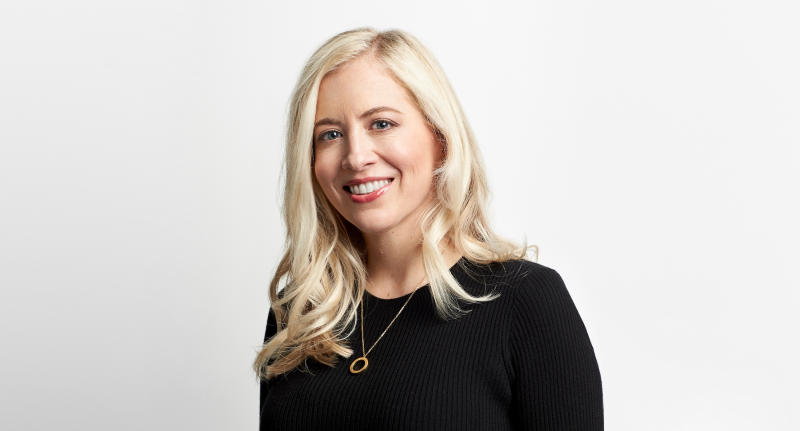 When Elizabeth Spaulding joined Stitch Fix in January 2020 as the company’s President, her mission was to help “shape growth and innovation.” Like many other companies, 2020 forced Stitch Fix to evolve and pivot their products and services in response to changing consumer behavior. “I had not anticipated the world would change roughly six months into joining Stitch Fix," she says. But it did.

While brick-and-mortar apparel companies and retailers were shutting down their physical stores due to the pandemic, Stitch Fix added customers and grew. The online apparel subscription service—which has amassed nearly 3.9 million active clients as of March 2021—launched several new features during the pandemic. And come 1 August 2021, Spaulding will replace founder Katrina Lake to be the company’s CEO.

Spaulding joined Stitchfix after a two-decade career at global consultancy firm Bain & Company. She was tapped to lead the company into its next phase of growth, including international expansion and new consumer shopping experiences. Part of that playbook, it seems, involves reshaping the way that the company sets and works towards its goals—including incorporating OKRs to drive strategic priorities.

A shift from focusing on activities to measuring impact and outcomes

Before Spaulding joined Stitch Fix, the company primarily used OKRs to set KPIs and other metrics rather than to define how high-level strategy would be implemented. That changed not long after she started, and OKRs became a tool to set (and work towards) strategic priorities. Stitch Fix sets OKRs at a company-level, which cascades down to each team and its operations. There are two main areas of focus—the consumer experience and the personalization experience.

As a leader, it was Spaulding’s first experience using the tool in a company-wide setting. At Bain, “OKRs was not an organizational tool,” says Spaulding. She did have some experience with it in a smaller setting—a couple of internal teams made up of prior venture funds and startup employees were using it within their business unit. But “in terms of deploying them, I think the scale is very different,” she says.

According to Spaulding, the most significant shift from introducing company-wide OKRs is the focus on outcomes, rather than activities. Previously, the company would track the completion of activities (like introducing a new feature) but didn’t measure the impact or output of those activities. This meant that “in the past, we may have implemented a new initiative but the results may not have met expectations or had the impact they could have,” says Tanya Raheja, the company’s strategy director. One example of that, says Raheja, is the introduction of direct-buy, a feature that allows existing customers to buy one-off items, rather than a bundle of selected items that the company calls a ‘fix’. Raheja says that focusing on outcomes have motivated teams to be more agile and innovate at a rapid pace, such as with the introduction of Fix preview, which allows customers to view their bundle of items before it is shipped. In the company’s second-quarter earnings call for 2021, founder and current CEO Katrina Lake told investors, “direct buy helped us achieve our strongest month-over-month revenue growth of any January on record.”

Incorporating OKRs as a part of a multi-system approach

More than six months into using company-wide OKRs, Raheja and Spaulding noticed another surprising benefit—cross-functional collaboration between teams on complicated projects became much more fluid. Says Raheja, “Our recent testing of new inventory models required collaboration across a range of teams including operations, engineering, merchandising and algorithms. Using the OKR framework we were able to successfully move idea to implementation more quickly than previously.” Having a set of OKRs that the company understood and rallied around made team alignment and visibility much easier to achieve, Raheja explained, and minimized areas where this didn’t happen.

But Spaulding admits that it’s not without its challenges. For starters, she says that she is still learning how to best incorporate OKRs when it comes to ‘zero to one’ projects—ambitious and lofty goals that don’t often have pre-existing framework to success. There’s a balance between helping and encouraging teams to aim high enough while not being discouraged when things don’t go to plan, says Spaulding. One of the things that she has tried to do to strike that balance is treat those OKRs as a learning mechanism. She cites the example of Google’s goal of reaching 20 million Chrome weekly active users in 2008. As John Doerr wrote in his best-selling book, “Measure What Matters”, when Google failed to meet that target, they reframed their failure as a foundation that would put them in a better place to tackle the problems differently and eventually reach a breakthrough.

At Stitch Fix, OKRs are one of many systems for tracking and setting goals, so integrating the process into “full-oriented” metrics and the company’s financial goal is something that Spaulding says the company is still learning how to do. The way that she sees it, OKRs are a “management mechanism that sharpens what it means to deliver (strategic) priorities,” as well as a tool that creates a shared sense of responsibility and accountability.

One of the biggest lessons Spaulding has learned is that the process of building OKRs is just as vital (if not more) than the OKRs itself. This is where the team can really take ownership of what they’re working towards, and see how their role fits within the bigger goals of the company—something that an employee in an 8000 person company can feel somewhat removed from.

And ultimately, it’s that sense of ownership that will get companies like Stitch Fix to move closer to their long-term vision.

Grading and Reflecting on OKRs: What’s the Difference?

Grading OKRs alone is not enough. Reflection is also critical. The two are different yet complementary conversations. Learn why.

How to Get OKR Buy-In

An OKR Coach takes a grassroots approach to implementation. Here are the questions he asks to guide teams.