Six years ago, like most businesses, the software company Adobe was saddled with antiquated annual performance reviews. Managers invested eight hours per employee and demoralized everyone involved. Voluntary attrition spiked every February, as waves of contributors reacted to disappointing reviews by taking their talent elsewhere. In all, the company devoted a total of eighty thousand manager hours — the equivalent of nearly forty full-time hires — to a mechanical process that created no discernible value. Adobe was transitioning full speed ahead to a cloud-based subscription business model, which it needed to keep winning. But even as the company moved its products and customer relations into a contemporary, real-time operation, its approach to HR remained shackled to the past.

In 2012, during a business trip to India, an Adobe executive named Donna Morris vented her frustrations over traditional performance management. Her guard lowered by jet lag, she told a reporter that the company planned to abolish annual reviews and stack rankings in favor of more frequent, forward-facing feedback. It was a great idea. The catch was that she hadn’t yet discussed it with her HR staff or with Adobe’s CEO.

With characteristic energy and persuasiveness, Donna hustled to bring the company around. As she wrote on Adobe’s intranet, the challenge at hand was to “review contributions, reward accomplishments, and give and receive feedback. Do they need to be conflated into a cumbersome process? I don’t think so. It’s time to think radically differently. If we did away with our ‘annual review,’ what would you like to see in its place? What would it look like to inspire, motivate, and value contributions more effectively?” Her post sparked one of the most widely engaged discussions in company history.

Donna’s candor became the catalyst for “Check-in,” Adobe’s new mode of continuous performance management. In a collective effort to move the company forward, managers, employees, and peers join in multiple Check-in conversations each year. Instead of falling back on the HR team, leaders throughout the organization take proactive ownership of the process.

Lightweight, flexible, and transparent, with minimal structure and no tracking or paperwork, Check-in features three focus areas: quarterly “goals and expectations” (Adobe’s term for OKRs), regular feedback, and career development and growth. Sessions are called by contributors and decoupled from compensation. Forced-distribution stack rankings have been replaced by an annual Rewards Check-in. Managers are trained to scale compensation based on employees’ performance, their impact on the business, the relative scarcity of their skills, and market conditions. There are no fixed guidelines.

Since the fall of 2012, when Check-in was installed, Adobe’s voluntary attrition has dropped sharply. By implementing continuous performance management with CFRs, Adobe has invigorated its entire business operation.

Donna Morris: Adobe was founded on four core values: genuine, exceptional, innovative, and involved. Our old annual review process contradicted every one of them. So I said to our people: What if there were no ratings and no rankings and no forms? Instead, what if you all knew what was expected of you and had the opportunity to grow your career at Adobe, where each of you is so valued?

Check-in has helped us to live Adobe’s values every day. To explain how the new process worked, we kicked it off with the first of a series of thirty-to-sixty-minute web training conferences. We rolled them out to senior leaders, then managers, then employees. (We had a 90 percent employee participation rate.) Each quarter we’ve addressed a different phase of Check-in, from setting expectations to giving and receiving feedback.

We’ve also invested in an employee resource center, which offers templates and videos to help our people build their constructive feedback skill set. Adobe has a lot of engineers who weren’t necessarily experienced with open dialogue. The center has helped them ease into the process.

Our leaders role-modeled Check-in. They needed to show they were open to feedback themselves, and comfortable being questioned on their vision.

Now we treat every manager as a business leader. They are allocated budgets for base incentives and equity, a pool of money to be distributed as they see fit. It’s super-empowering for them to know they are truly responsible for their reports. It’s equally empowering for employees to know they have input into the process. By scheduling regular Check-ins through the year, they keep their manager apprised of their progress against action items and goals from prior conversations, along with development needs and ideas for how they might grow. And now that we’ve done away with fixed pots of compensation, teammates are no longer competitors.

Individuals want to drive their own success. They don’t want to wait till the end of the year to be graded. They want to know how they’re doing while they’re doing it, and also what they need to do differently. Under our new system, our contributors get highly specific performance feedback at least once every six weeks. But in practice it happens every week. Everybody knows where they stand and how they’re contributing value to the company. Instead of lagging, the performance management process is leading.

Our feedback under Check-in is often manager-to-employee, but it can be flipped to employee-to-manager: “I felt like I was out on a limb with project X and needed more support.” And because Adobe is heavily matrixed, feedback can also be peer-to-peer. In my department, for example, I have a communication partner, a finance partner, and a legal partner. While they report to other people, there are strong dotted lines between us. We review our expectations and give one another feedback on our performance.

From Adobe’s experience, I’d say that a continuous performance management system has three requirements. The first is executive support. The second is clarity on company objectives and how they align with individual priorities — as set out in our “goals and expectations,” which equate to OKRs. The third is an investment in training to equip managers and leaders to be more effective. We’re not shipping people out to courses. We’re steering them to one-hour sessions online, with role-played vignettes: “Do you need to give difficult feedback? Here are the steps.”

Corrective feedback is naturally difficult for people. But when done well, it’s also the greatest gift you can give to someone — because it can change people’s mindset and modify their behavior in the most positive, valuable way. We’re creating an environment where people say, “You know what? It’s okay to make a mistake, because that’s how I’m going to grow the most.” That’s a big part of our culture change.

As Check-in makes clear, HR leaders exist for the success of the business. Our role is to consult with other leaders on how to make all of our constituents successful in fulfilling the company’s mission. Success isn’t built by forms and rankings and ratings. It’s not driven by policies and programs that bog people down and get in their way. The true mechanisms for success are the ones that build capabilities and enable people to deliver for the company.

For a service business, nothing is more valuable than engaged employees who feel they can make a difference and want to stay with the organization. Turnover is costly. The best turnover is internal turnover, where people are growing their careers within your enterprise rather than moving someplace else. People aren’t wired to be nomads. They just need to find a place where they feel they can make a real impact. At Adobe, Check-in is making that happen.

John Doerr is an engineer, acclaimed venture capitalist, the chairman of Kleiner Perkins, and the co-founder of WhatMatters.com. 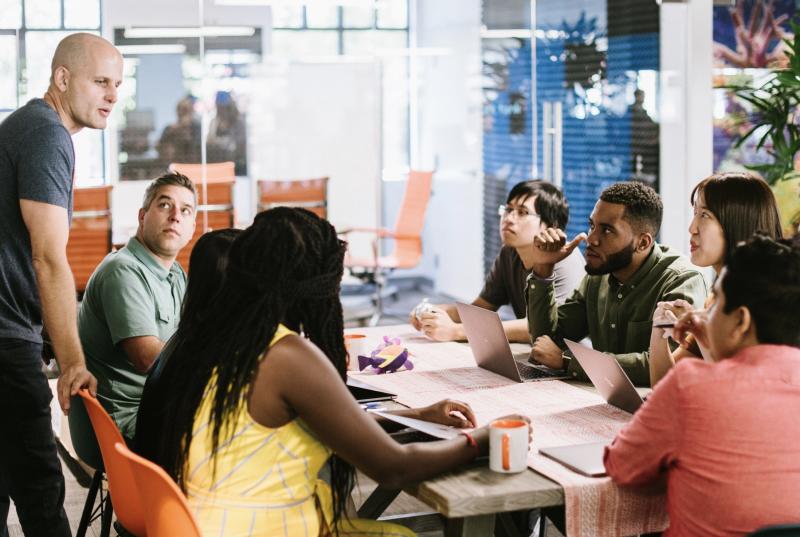